Archangels are God’s special messengers during times of great importance in the history of salvation and in events affecting the human race.  There are three (3) named archangels: Michael, Gabriel, and Raphael.

The name Michael refers to “Who is like God ?” phrased as a rhetorical question, expressing disdain against the prideful angels he fought against.

This brings to mind that God is Almighty and sovereign and all powerful.  Archangel Michael is loyal and obedient in service in his love of God.  St. Michael will defend all who love God, and defeat all who spread the darkness of evil.  The name Michael appears in the Old Testament (Book of Daniel) and in the New Testament (Book of Revelation and Epistle of St. Jude).

The short PRAYER TO ST. MICHAEL was written by Pope Leo XIII.

It became a public devotion as a prayer to protect the Catholic Church beginning in 1886. A longer version of the prayer exists also (and can be found online); however it is the shorter version that traditionally was recited at the end of every low Mass in Roman Catholic churches until the 1960s.  The prayer continues to be a powerful private devotion, with many faithful of both Byzantine and Latin rites continuing to offer the short prayer to St. Michael.    Knowing the assaults on the Church continue from all directions and in many forms, this prayer along with other devotional prayers for protection, such as our Byzantine prayers to our Most Holy Theotokos, are truly needed across all time periods of history.  Both the Mother of God and St. Michael hold significant protective roles for all faithful, religious, and our Church.

See these pages also on this site:  Prayers for Protection;  Honoring Our Blessed Mother

The honor given to St. Michael is an ancient tradition that dates back to the 4th century of the Church.   St. Michael is a common patron saint of many Catholic and Orthodox churches.

In most Eastern Christian Churches, November 8th is the Feast of St. Michael and all heavenly hosts.  The name given to the feast day is:   The Synaxis of Holy Archangel Michael and all Angelic Powers.

In the Roman Catholic Church, St. Michael is honored on September 29thalong with St. Gabriel and St. Raphael.

Every nation and every Christian has their own guardian angel.

When we actively participate in Liturgy,

we combine our hymns of praise and prayers of thanksgiving with all the heavenly hosts. 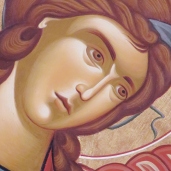 St. Michael is the Commander of the Heavenly hosts; he is most frequently depicted in icons holding a shield and spear.  He is attentive and on guard; St. Michael is portrayed as battle ready and strikingly poised to respond to God’s commands.  St. Michael defeated Satan and the evil powers casting them out of Paradise; and is victorious over them, including at the end time final battle.  He is the guardian and protector of the Church.  St. Michael is a leader above all angelic powers and model of a spiritual warrior against the darkness of evil.  We pray to St. Michael to protect us in the spiritual battles we face in our temporal realm and to guard our Church, those in ministry, our clergy, and our families and homes.

Keep an icon of St. Michael in your home.

Revelation 12:7-9   Then war broke out in heaven; Michael and his angels battled against the dragon. The dragon and its angels fought back, but they did not prevail and there was no longer any place for them in heaven. The huge dragon, the ancient serpent, who is called the Devil and Satan, who deceived the whole world, was thrown down to earth, and its angels were thrown down with it.   (NABRE)