+ Cancelled this year due to an ice jam that created safety issues and left behind damage to the river bank area.

We experience in our lives both the beauty and power of nature, God’s creation.   In these events, we are reminded of the limits of our human abilities to control all, and our dependence on God.  God does not inflict events or suffering on us, but rather we are called to closer relationship with Him in these times.  In nature, we may be reminded of all of this, especially in the gift of human awareness of mysteries, things that are beyond our capacity to understand or explain.

With the serious problem of an ice jam and potential flooding of the Susquehanna river only days prior to our scheduled river blessing, our concerns turned to our community and away from our goal of continuing with this event.  Even as the threats eased, the amount of ice in huge boulders and blocks left along the banks of the river and other factors made it far too dangerous to proceed.

In response, our prayers and assistance must always turn to all those living along the river, many of whom include our friends and parishioners, and to everyone living in potential flood zones.  River flooding and threats of flooding are very stressful events for communities in our area, and historically, for those who have experienced, witnessed, or lived the impact of each event.   Our focus turns to prayer for all who are ever affected and for future protection of all.

In every need such as this, we thank all who serve in emergency management, disaster relief and preparedness, law enforcement and all first responders, and public officials for the important assistance they give during this time.  We thank also all volunteers and workers who serve in any other way to assist, including local media for their role in communication.

Our focus is on prayer for everyone dealing with the aftermath of the ice jam or flooding and the anxiety that had been created by the threat of flooding.  Photos (taken January 21, 2018 and January 28, 2018) in West Pittston, Pennsylvania.  Unfortunately, conditions worsened on January 24.  Enormous blocks of ice were left along the banks of the river after rising and then falling as the river receded.  Damage occurred, but the majority of the area was spared.  While there is a kind of beauty in nature seen in the photos below, there is also a need for the concerns of others and the damage such events leave behind.   The river ice affected all towns along the river’s path.   Because our church is located in Pittston, we are sharing some of the scenes specifically to the Greater Pittston area.   Other similar scenes could have been seen along the river elsewhere.

Historic amount of ice stretches across the Susquehanna river, Pittston, Pennsylvania, formed after several weeks of below average temperatures in the region. Firefighters’ Memorial (Water Street) bridge in the distance. 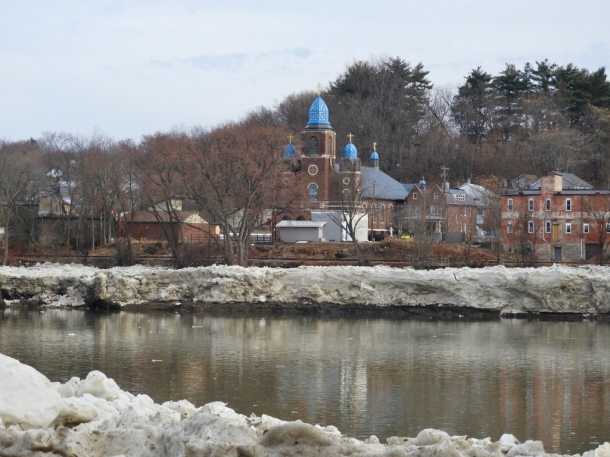 Ice boulders as tall as the people coming to see them. Ice remnants surround the West Pittston cherry blossom trees. 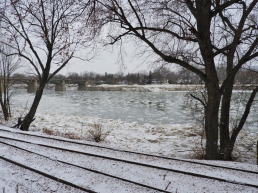 The following are from our 2017 River Blessing.  The five parishes hosting the blessing are from different towns in our Wyoming Valley:  Wilkes-Barre, Wilkes-Barre Township, Kingston, Swoyersville, and Pittston.  To see a photo slide show and learn about the tradition of river blessing CLICK HERE to the River Blessing Page on our site. 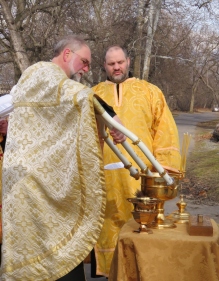 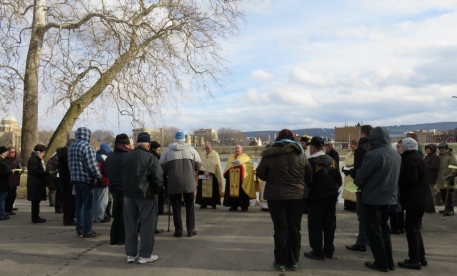 Credits:  All original photography on this page & on this website by Mary Anne Fedor in volunteer service as a parishioner of St. Michael Church.