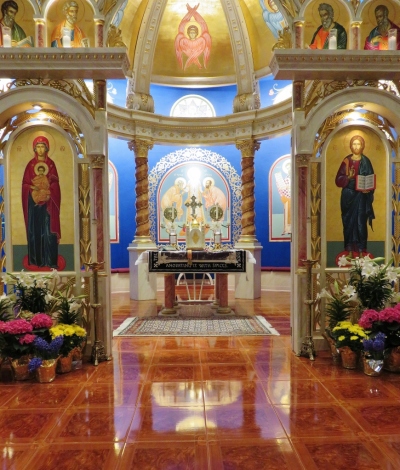 On Friday, December 6th, the Feast of St. Nicholas, our parish families of St. Michael Church, Pittston and St. Nicholas Church, Swoyersville learned the heartbreaking news that our pastor and dear friend in Christ, Father Gary Mensinger had passed into eternal life. It is not exaggeration this news sent a shockwave of disbelief to every person blessed in knowing Father Gary. It was only 18 months since we gratefully welcomed him back on Pentecost Sunday 2018 following medical leave. He had survived a first heart attack on Holy Thursday that year. His recovery at that time was a joyous return to continue his work to be with his flock. Now, that work and responsibility has been entrusted to us as  parishioners to fulfill in helping each other and our new pastor.

Father Gary was assigned to our two parishes in late July 2013. He surprised everyone with his confidently vibrant spirit – a hallmark of the 21 years of ordained priestly ministry he achieved in 2019. In a way that only Fr. Gary could uniquely model, he energized people by simply being who God made him to be. He was authentic and genuine, a true what-you-see-is-what-you-get kind of person.

Fr. Gary would repeat the stories of his struggles in seminary formation to prove a point.  He was very self-aware of how different he was from the other students, that is, he was extroverted and talkative.  He mentioned how he was ready to quit many times but was encouraged by a former cantor to stay the course.  And he would only laugh at himself and the experience in saying how he was (in his own words) “thrown out” of the seminary class that taught Church Slavonic.  It is to Byzantine Catholic churches what Latin is to Roman Catholic churches, a liturgical language used periodically.  He had such difficulty learning it and considered himself an unconventional student.   Fr. Gary recalled the challenges he overcame in facing his own weaknesses.  He’d confess with a bit of amusement that a silent retreat hosted by the religious sisters for the seminarians did not exactly tap into his natural inclinations, his inability to be still for very long.  In telling his vocation story, he wanted everyone to see that it’s ok to be different: “God uses us as we are.”  And that God has the ability to guide us in ways that we often don’t see for ourselves.  That knowing acceptance and awareness that all people have challenges and crosses in life, not necessarily physical crosses, is the way Fr. Gary easily related to others and others with him.  And so he formed solid friendships everywhere he traveled.

Naturally, he was full of surprises and jokes also. You could never be prepared for when one of his straight-faced statements would flip and unexpectedly finish in a punch line. And how many times did he love to prank parishioners as they greeted him leaving the church after Liturgy!   In the blink of an eye, he’d seriously remark, “Your shoes are untied” resulting in the instinctive response of the unsuspecting person to look down, only to realize their shoes didn’t have ties at all !   That would result in Father Gary chuckling with his broad smile and reveling in the “gotcha” moment.   And he’d never tire from repeating the exercise!  He loved to laugh, even over a silly joke.

His spiritual joy and radiance were no more evident than in his homilies. There was never a chance for boredom during any! Presented from the front aisle of the church, his “faith on fire” homilies meant those present were getting every last drop of Dunkin (coffee) powering him as much as every spark of the Holy Spirit pouring out. He used direct eye contact to connect personally and questions to cultivate thinking.

He’d start with something like: “What’s the one thing we all dislike but is most certain to happen in our lives?” Then he’d look around the pews for one person brave enough to guess at the answer [which happened to be “change!”]. A burst of praise was showered on the lucky soul who hit upon the correct word. Unrelenting, he’d continue: “Does anyone really love change? None of us likes change! But we cannot grow in our faith if we aren’t willing to!” Turning serious, he’d remind all that willingness to change was the way to become more like Christ, more forgiving and more charitable. And he’d challenge parishioners to change the world by starting where it mattered first, with our own self. He admitted often during his homilies that he was preaching as much to himself as to “his people”.

If one of his homilies wasn’t spirited enough to move a cold heart, there were plenty more. His energy was visible and palpable when he talked about one thing that empowered him the most: Compassion!  Not limiting its meaning to showing concern for those suffering misfortunes in life, Father Gary unraveled the word to reveal what it meant to him personally.  In his bold dynamic style, he’d light up with excitement, do a kind of air-fist-pump dance with both hands up in the air proclaiming “Compassion means ‘with passion’! It’s all about being passionate folks!”  He’d drill the point home that he wanted us to approach everything in life with full blown zeal, no holding back. Over the summer of 2019 he adapted the Penn State cheer into a new slogan of “We are Church”.  And throughout his homily he kept repeating with total excitement to get all of us in the pews on board with this latest cheer.  And this cheerleader pastor had everyone in the pews practice repeating it until he was sure no one would forget!

During other homilies, Father Gary would apologize for his off key voice as he attempted to sing (and attempt is an understatement) a song he would tie to his preaching.  He seemed to have an endless collection of pop hits, ever ready to call upon, from yesteryear floating in his memory. Needless to say it wasn’t easy to always recognize what he was singing.  But that never stopped him.  He looked a little disappointed at us in the pews if we didn’t quite “get” the tune.   But then he’d remind us, and we’d smile politely.  He loved to alter the main lyrics to create a new version, a church version. One of his last lyric remakes was “Stop in the name of God!”  It was all about making time during the (Christmas) Philip’s fast to pray and plan times of silence amid the holiday craziness.

The message of his last homily included a warning to not be tempted to “loose our cool” in the race to do it all as the holiday approached. As much as anyone, he enjoyed Christmas activities and fun. Yet he didn’t want people to become so attached to the sparkle that it became more important than God.  In the same homily, he delighted in sharing a playful idea.  He was not going to forget to hang mistletoe on the front and back doors of the Pittston rectory. But in his famous “Men-zinger” twist on the unexpected coming next and with the gleam of prankster, added: “But not to worry folks! Nothing’s going to happen. No one ever comes in those doors!” If there is mistletoe everywhere among the saints and souls in eternity, it’s a good guess who is responsible!

Ironically, it was Father Gary’s ability to reach people through humor that led many to realize this was someone they could trust on issues of a serious nature. Behind the humor was a deeply sensitive heart for those in need.   As priest, former EMT, firefighter, and social worker, Father Gary experienced tragedy, suffering, and loss. More frequently than most are aware, he was not afraid to express his own grief alongside others or quietly off to the side after witnessing others in emotional pain. Of any priority, whether visiting the sick, counseling the troubled, educating children and youth, bringing healing through the Sacraments, his desire was to share and live the basics of our faith: the Beatitudes, Matthew 25, and the Greatest Commandment Matthew 22:37.

Father Gary expressed more than ever what was necessary to have eternal life. Even so, in his daily people encounters he never forced anyone to do what their hearts were not ready for. He accepted people wherever they were on their faith journey, praying for the Holy Spirit to do the work of transformation.  Only then as he’d so often demonstrate that a soul could come to a V8 moment – his funny way of describing metanoia, demonstrating the idea with a hand blow to the head for emphasis.

He applied this approach among his congregations, believing it is the Holy Spirit that moves and inspires people to use the gifts they have from God to the good of all and ultimately for God. It is why he opened meetings, his monthly online radio program from Hazleton, and adult formation classes, with the Byzantine Catholic prayer to the Holy Spirit, and to encourage others to close with spontaneous prayers from the heart.

Never claiming to be perfect, Father Gary was first to admit he had trouble slowing down and making time to stop; he preached to himself and parishioners how precious time is; that we should use it and treasure it; and especially to always be prepared for the call of our Master. With a realistic view of his own mortality and that of others, his homilies often included themes of repentance of sins, with reminders to make frequent visits to the “God box”, his reference to the confessional. He preached “repent” and “the time is now” and the necessity of an open heart probably more than any other topic. A favorite analogy was comparing the hard messages of the Gospel of what we didn’t want to hear to a hot cup of black coffee on a 98 degree day. The sum total of his role as priest was to bring souls to Christ and he realized the weight of this serious responsibility.

Father Gary loved being a priest and candidly shared his vocation story often. The path to his vocation was not a direct one, initiated from suggestions made by family and friends. In wonder, he felt the awesome privilege of the priesthood – of God using an ordinary person like himself as an instrument – to bring the healing power of the Sacraments to others. He never hesitated to disclose that the Office of Christian Burial was one of his favorite priestly acts for what it represented: the honor of assisting souls on their journey home.

In all of these examples of what Fr. Gary preached and how sincerely he used the word “friend”, we can appreciate the lesson: to do what is right in spite of the limits of our human conditions. Our hearts are grieving the loss of so young and dedicated servant of God. Consolation in our faith is that our friend and shepherd, Father Gary has been welcomed into the communion of souls departed before him, hearing the words from Scripture “Well done, good and faithful servant”.

We pray his soul is blessed to behold the awe of the beatific vision he expressed he was ready to meet.  Our memories now may be locked in time with the love Father Gary had for us and our love for him. But as people of faith in Resurrection, we share the hopefulness of God’s mercy and promises that we will once again be united eternally. For these and for the many untold stories too numerous to recount, we have much gratitude.